Get in touch with nature

A pilgrimage route through flowers and greenery

The origins of the Saikoku Kannon Pilgrimage go back about 1,300 years to the year 718. The full route takes in 33 sites, with Nakayamadera Temple in Takarazuka being the 24th. To this day, the original route can still be traced along the north side of the Hankyu Takarazuka railway line. Peppering the route are temples and shrines both large and small. The precincts of these holy places offer an abundance of greenery and floral splendor. The route also takes you to Yamamoto, an area renowned in Japan for the growing of garden trees. 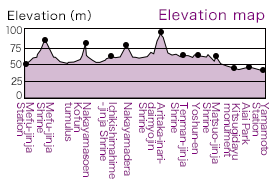 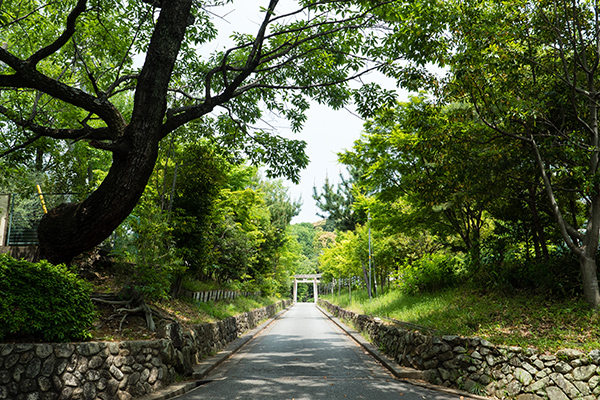 The verdant approach to the shrine 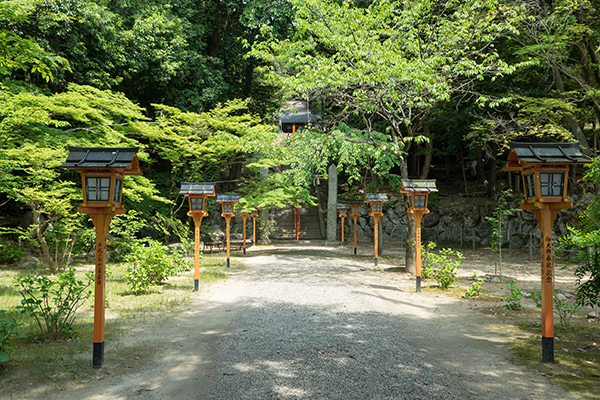 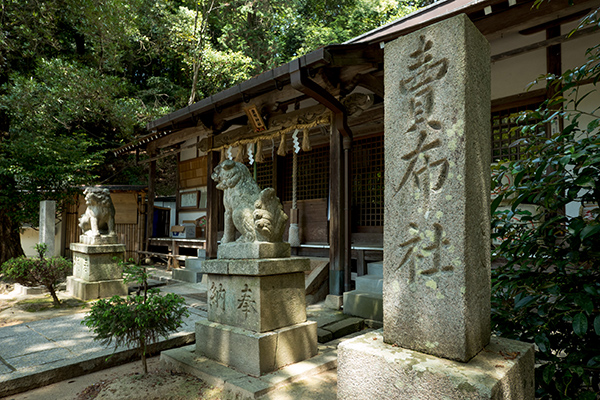 Stone marker with the shrine’s name 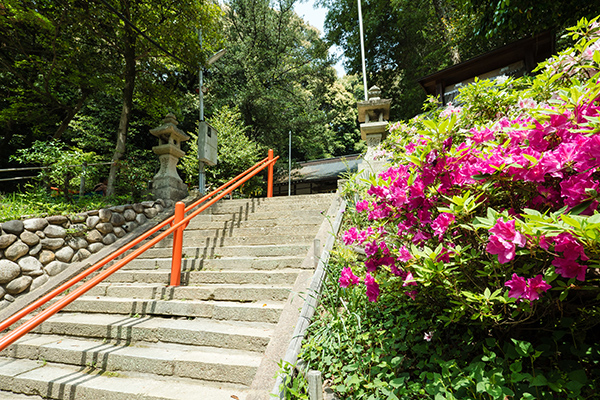 Said to have been established in 610, this shrine is dedicated to Shitateruhime, a daughter of the deity Ōkuninushi. A stone inscribed with the name of the shrine was erected in 1736. The shrine, along with the evergreen forest on the shrine grounds, has been designated a cultural property by Takarazuka city. In spring, the place overflows with cherry blossoms. 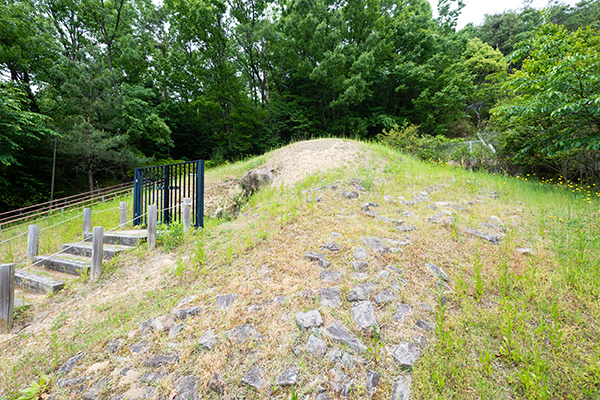 The tumulus forms a small hill 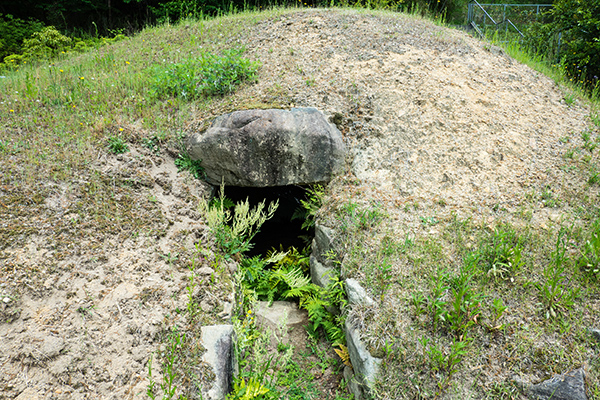 Entrance to the stone chamber 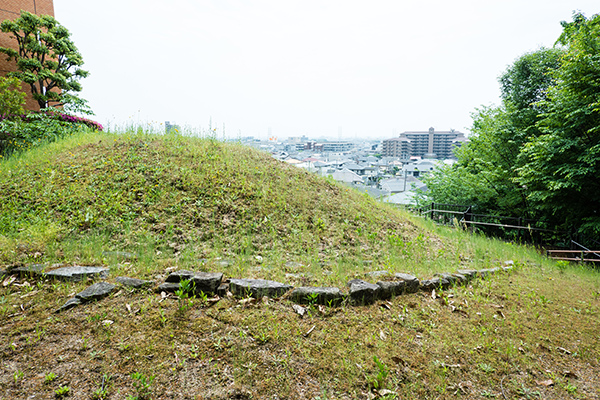 A view of the city from atop the hill

This tumulus, discovered in 1982, has a rare octagonal shape. Believed to have been constructed in the Asuka Period (mid 7th century), it’s a nationally designated historic site. 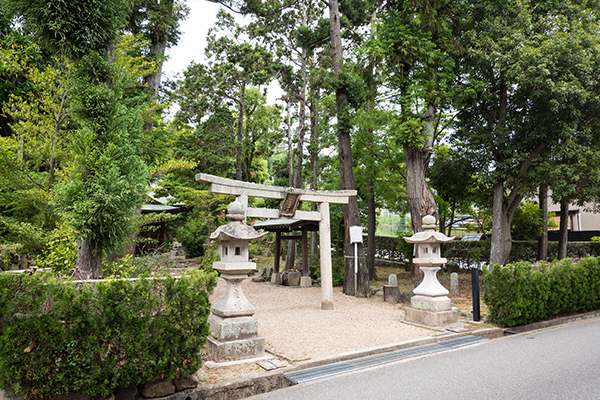 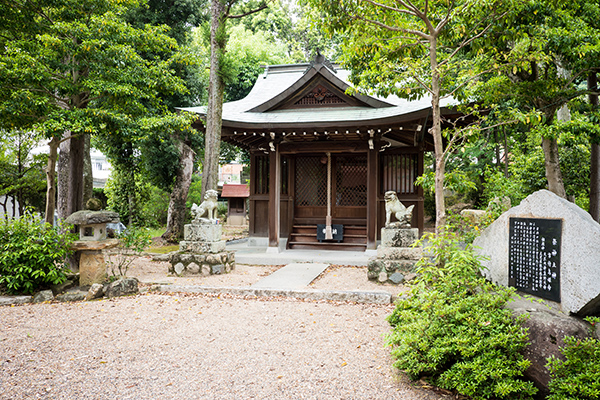 The precincts are enveloped in silence

Originally located on the precincts of Nakayamadera Temple, this shrine was relocated to this spot in the early Meiji Period (late 19th century). The relocation was prompted by a government edict on the separation of Shintō and Buddhist sites. The shrine is dedicated to Ichikishimahime, a deity of business and entertainment. 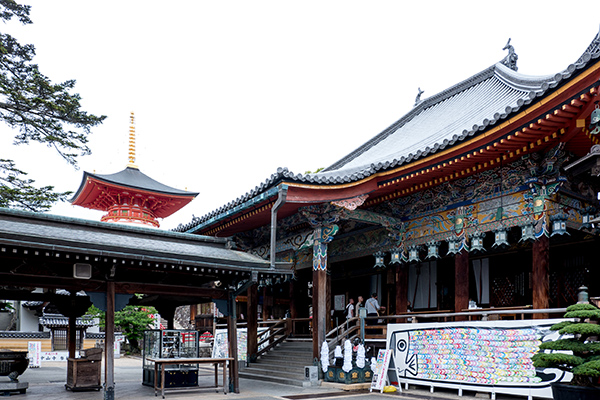 Worshippers come here to pray for a safe birth 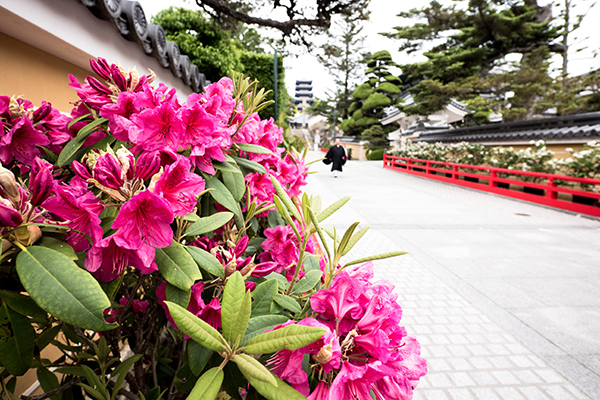 Rhododendrons on the temple approach 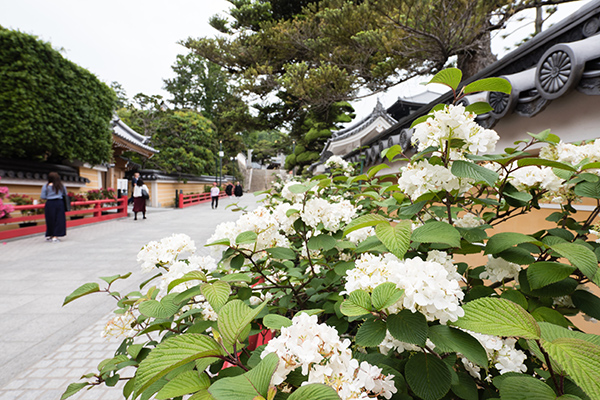 The 24th of the 33 temples on the Saikoku Kannon Pilgrimage, Nakayamadera is famed for the blossoms of its ume (plum) and cherry trees. Seasonal flowers flank the approach from the sanmon gate to the main hall. 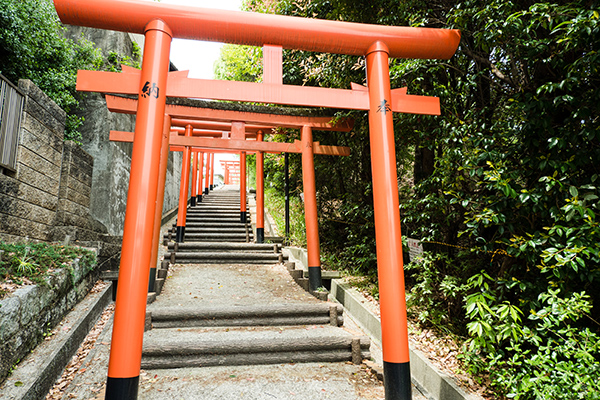 200 meters to the hilltop 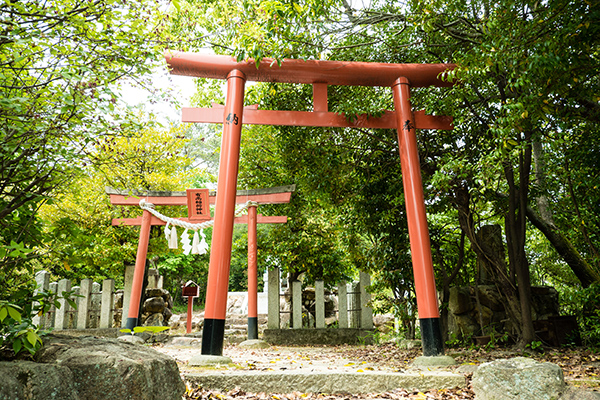 The final torii has a plaque with the shrine’s name

You’ll come upon a line of vermillion torii gates when walking through this residential area. The string of torii winds upwards between houses to a hilltop. 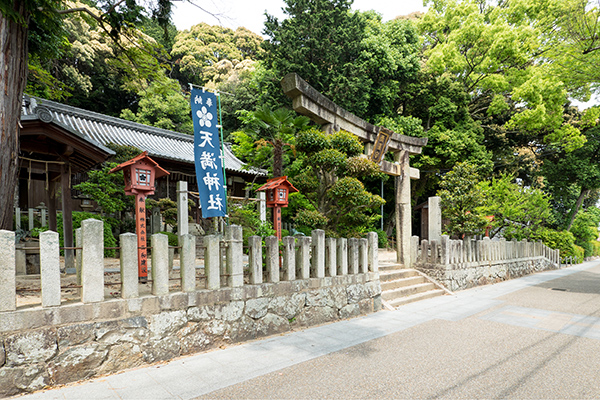 Tenman-jinja is surrounded by trees 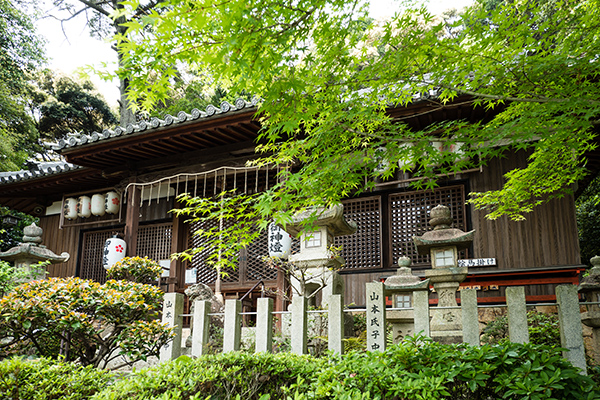 You can look forward to beautiful autumn colors

The giant tree of Kuromitsu-inari-jinja 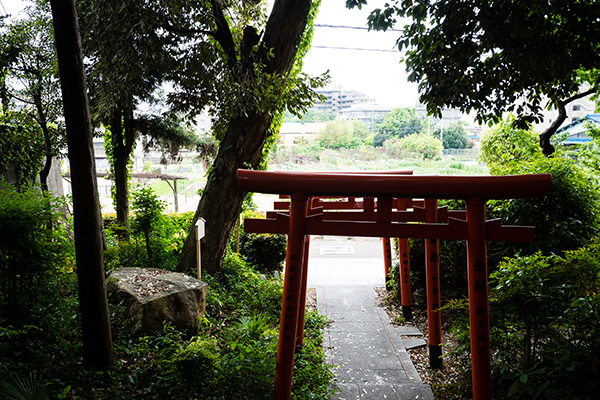 The rock to the left was hurled by Gyōki

Cross the Tenjinbashi Bridge over the Tenjingawa River and you’ll reach this shrine, dedicated to Sugawara no Michizane—scholar, poet, and statesman of the 9th century. During the May festival held every five years, a mikoshi (portable Shintō shrine) is carried here from nearby Matsuo-jinja Shrine. The next mikoshi procession is in 2018. On the eastern side of the precincts is Kuromitsu-inari-jinja, an auxiliary shrine. Here you’ll find a giant Quercus gilva tree and a boulder. According to legend, this boulder once blocked the path of Gyōki, a Nara Period Buddhist priest, who used his walking stick to smite the boulder out of his way. 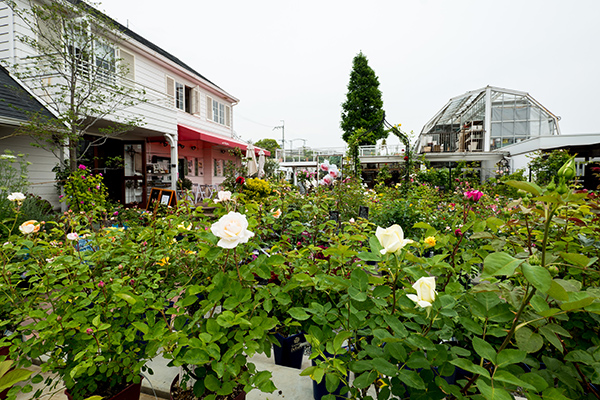 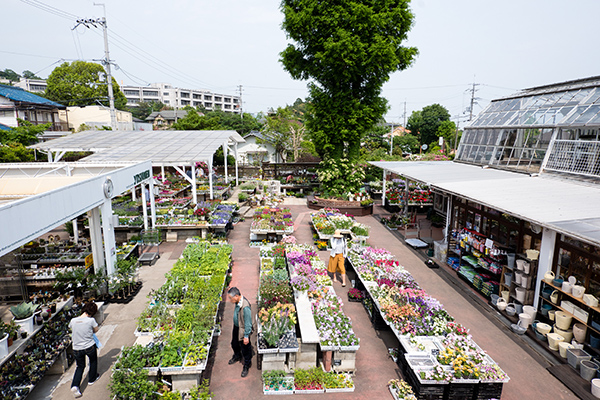 The giant dawn redwood tree is a landmark

A nursery founded in 1887. The greenhouse and the giant dawn redwood tree are distinct landmarks on the pilgrimage route. The 3,300-square-meter site is filled with flowers and greenery, such as seedlings, garden trees, and fruit trees. Enjoy beverages and waffles at the Bel Fiore café on the premises. 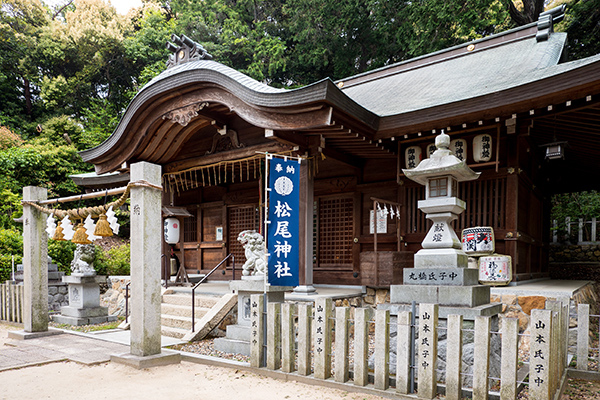 Matsuo-jinja is dedicated to a deity of war 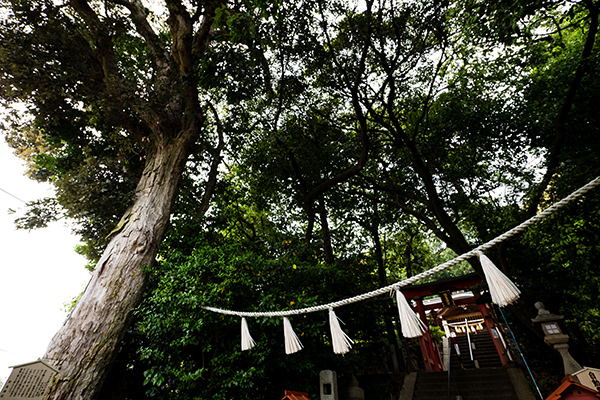 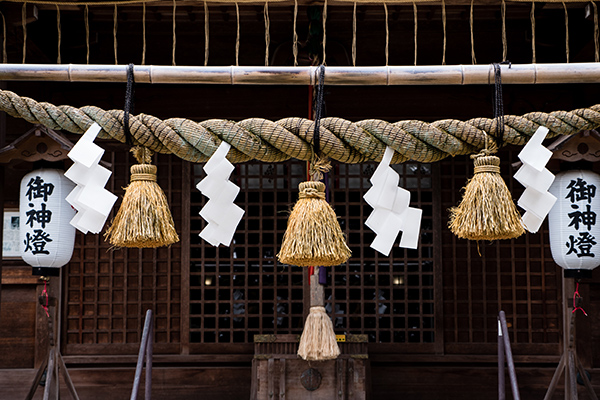 Shimenawa ropes in front of the worship hall

This shrine is dedicated to Sakanoue no Tamuramaro, a general known for leading the conquest of the Emishi people in the 9th century. There’s a certain incongruity in the fact that Matsuo-jinja lies so close to Tenman-jinja on the pilgrimage route. While the former worships Tamuramaro as a deity of war, the latter worships Sugawara no Michizane as a deity of learning. The two shrines jointly hold a mikoshi procession festival every five years, as well as an annual fall festival. They are the only shrines in Takarazuka that have a giant Quercus gilva tree at the entrance to the precincts. 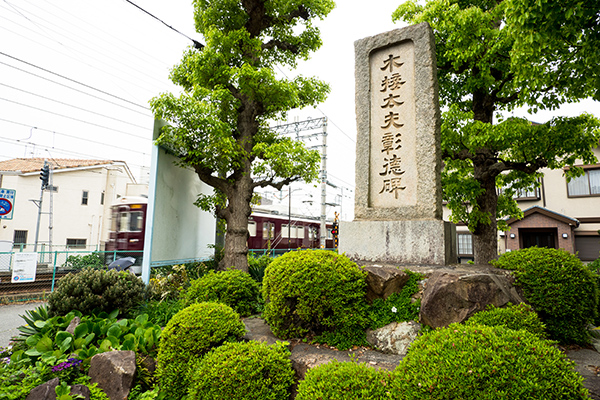 The Hankyu railway runs right beside the monument

For his achievements in grafting and other gardening techniques in the 16th century, Sakanoue Zendayū (Yoriyasu) had the title of Kitsugidayū (“master grafter”) bestowed upon him by Toyotomi Hideyoshi. This monument was erected in his honor in the 1910s. It’s a landmark of Yamamoto, one of Japan’s three major areas for producing garden trees. 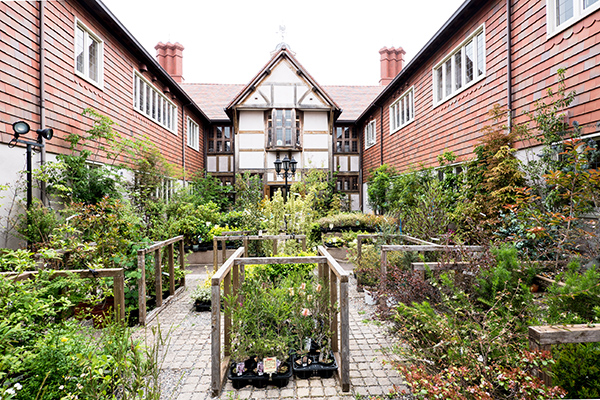 The Bumble Bee library café is on the 2nd floor 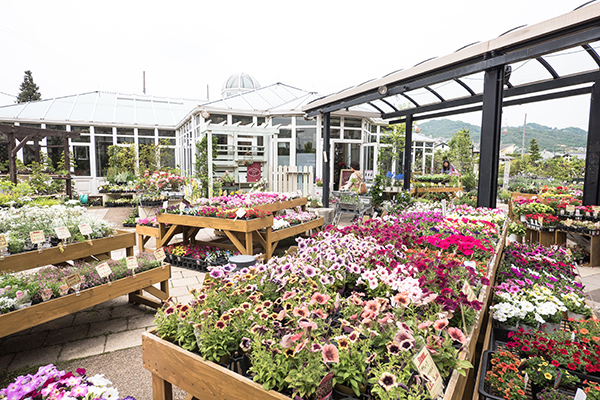 The greenhouse behind the main building

Opened in April 2000, this park offers a wealth of information on trees and flowers. With various garden trees, saplings, model gardens, and more, this park covers virtually everything there is to know about gardening. Across Route 176 is Yamamoto Shin-ike Park, where the Takarazuka Garden Tree Festival is held every spring and fall (early April and mid October).