Osamu Tezuka created the foundations of Japanese animation and is known as the “god of manga.”
Many of the places Tezuka spent time at as a child are still there today. Why not visit some of the places that inspired his creations?
The first part of this route introduces you to Takarazuka as a place of dreams and as a futuristic town. There’s a special focus on downtown Takarazuka, where there once stood a number of major leisure facilities. Next, you can check out the rural side of Takarazuka, including shrines and the pond in Gotenyama where Tezuka went bug hunting. Visit the forest where he nurtured his appreciation for the preciousness of life. 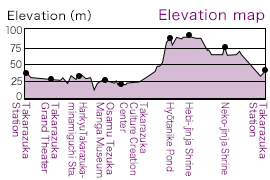 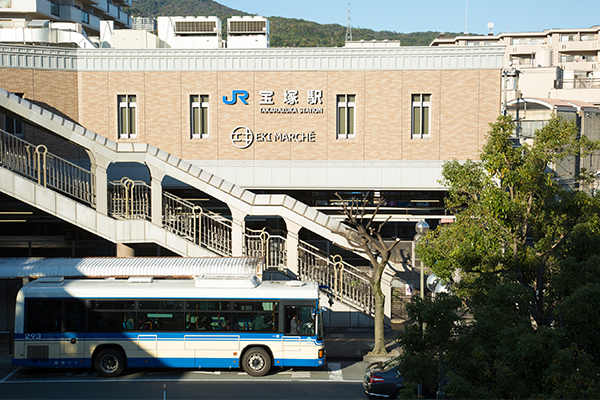 Right after World War II, Tezuka was approached by a group of American soldiers near Takarazuka Station. Unable to converse in English, he ended up getting beaten. He later recalled that this experience had a large influence on his manga. Many of his works involve the theme of communication or the lack thereof.
One such work is Atomu Taishi (Captain Atom), the manga that introduced the character of Atom (aka Astro Boy). This series portrayed conflict between humans on Earth and aliens from outer space. It also explored Atom’s troubled relationship with his father/creator Dr. Tenma. 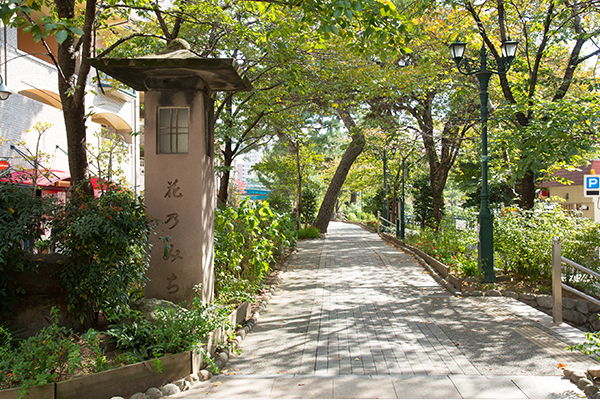 An old-fashioned stone lantern at the entrance of Hanano-michi 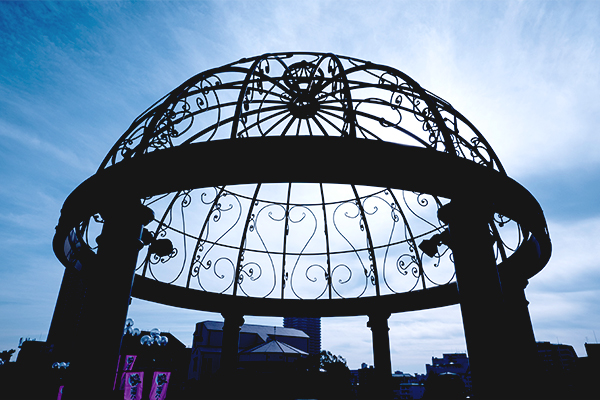 Tezuka was born in 1928 in the city of Toyonaka in Osaka Prefecture. He moved to Takarazuka at the age of five and spent his childhood there. In those days, Takarazuka had a number of leisure facilities, such as the Luna Park amusement park, a botanical garden, and a zoo. The Takarazuka Revue put on Parisette and the “Sumire no hana sakukoro” song from that show was a big hit. The Takarazuka Ōhashi Bridge was constructed to connect the left and right banks of the Mukogawa River. The area around Hanano-michi (Flower Avenue) and both sides of Mukogawa thrived as one large leisure zone. Takarazuka became a place of dreams.
Perhaps in the eyes of young Tezuka, the Western-style buildings, trains, and musical performances by young actresses made Takarazuka a dreamlike town of the future. 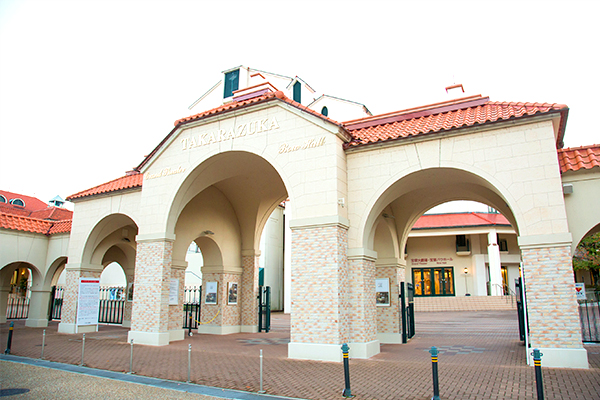 Entrance to the Takarazuka Grand Theater 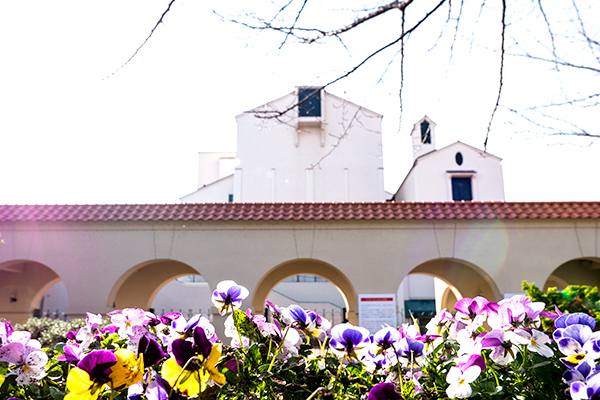 Violets and the theater 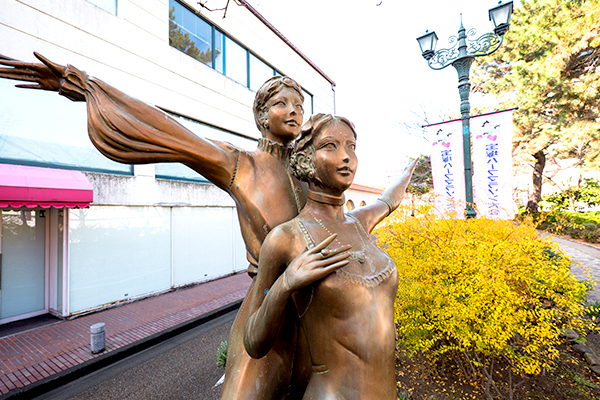 Next to Tezuka’s house was the residence of the sisters Otome Amatsu and Kayoko Kumono, who were Takarazuka Revue stars at the time. The Gotenyama district was home to many other Revue members. Growing up in this milieu, Tezuka was familiar with the Takarazuka Revue. He would sometimes go to watch performances, a habit that continued after he launched his career as a manga artist.
It is widely known that Princess Knight (often called the first girls’ manga) was inspired by the Takarazuka Revue, where women play men’s roles. Years later, The Rose of Versailles manga created by Riyoko Ikeda became a huge hit performance for the Takarazuka Revue. Following Tezuka’s death, two of his works, Black Jack and Phoenix, were adapted to the Takarazuka stage to commemorate the opening of the Osamu Tezuka Manga Museum.

Wedding at the Takarazuka Hotel 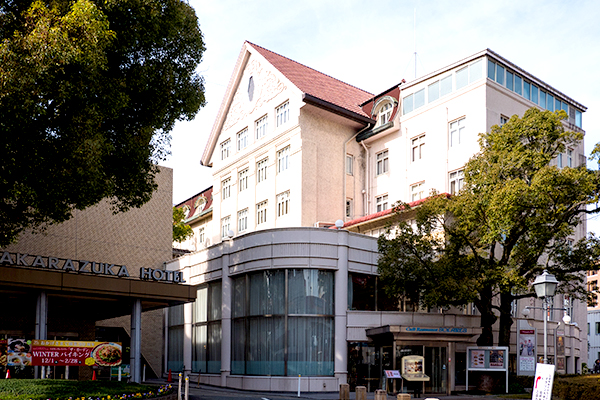 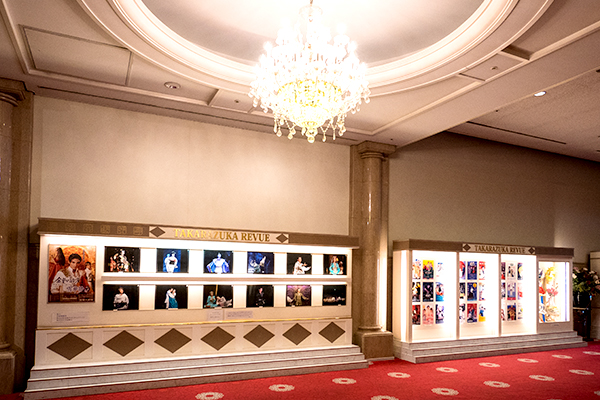 Being the official hotel of the Takarazuka Grand Theater, Takarazuka Revue items are on display 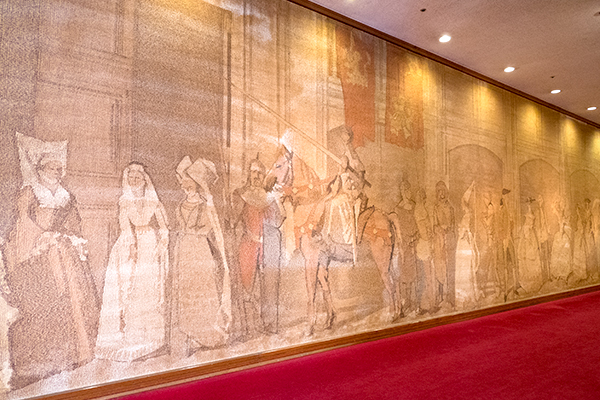 Part of the curtain used at the Takarazuka Grand Theater

When Tezuka married his childhood sweetheart in 1959, the wedding reception was held at the Takarazuka Hotel. This hotel, which opened in 1926, was built in a Taisho Period modernist architectural style. Back in those days, a social club called the Takarazuka Club was based here. Many high-society ladies and gents were drawn to this prestigious hotel.
In 1959, the manga magazine Weekly Shōnen Sunday ran a story called Dr. Thrill in which Takarazuka Hotel made an appearance. Perhaps Tezuka had his own wedding in mind when he put the hotel in this manga.
(The Takarazuka Hotel was relocated to the west side of the Takarazuka Grand Theater on June 21, 2020, and opened. The photos and testimonials refer to the former Takarazuka Hotel before relocation, so please be sure to visit us without any mistakes.) 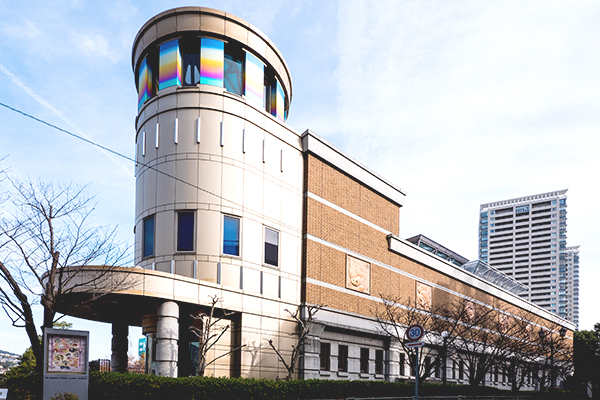 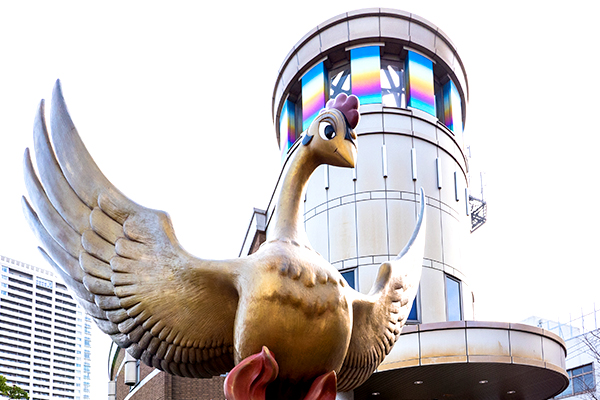 The Phoenix in front of the museum

Five years after Tezuka’s death in 1994, this memorial museum opened its doors. In front of the museum is the Phoenix. This monument expresses Tezuka’s strong hope for peace following his experiences during World War II. It also represents Takarazuka city’s commitment to peace. Inside the Phoenix is a time capsule scheduled to be opened in 2024.
Explore Tezuka’s world through videos and a library of his works, and try your hand at creating an animation.

Handprints in front of the Osamu Tezuka Manga Museum 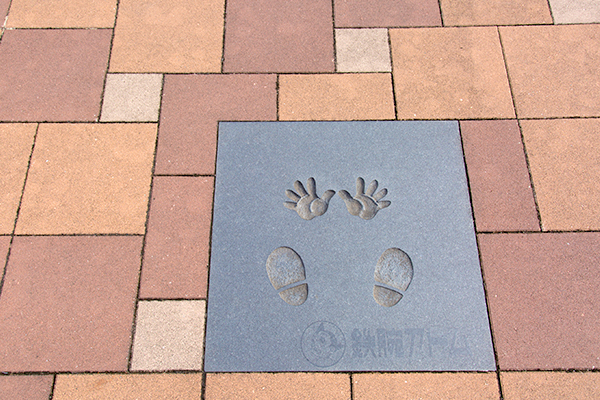 Astro Boy’s handprints in front of the museum

The pavement around the Phoenix bears the hand- and footprints of Tezuka manga characters—it’s just like the Chinese Theater in Hollywood. See how small Uran’s hands are and how big Garon’s are. Dr. Ochanomizu’s nose-print is here too! It’s as if characters such as Sapphire, Astro Boy, and Higeoyaji were real-life actors. As a matter of fact, Tezuka employed his own version of the star system in his work. He considered his characters to be actors and gave them different roles in different stories.
For example, Higeoyaji was a teacher in Astro Boy, but he debuted in 1943 as a detective. He also played a major role in Jungle Emperor, and stood by Leo, the protagonist of the story, until the end. 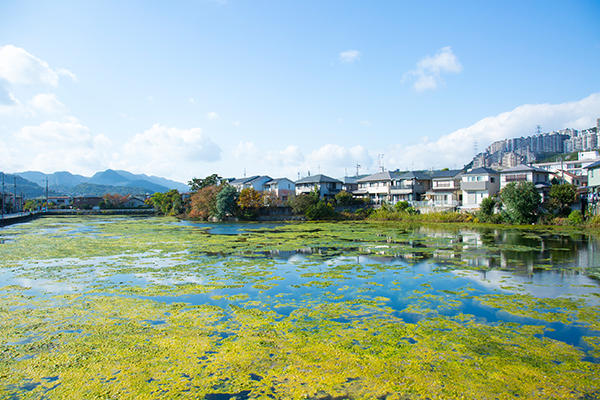 The Gotenyama district stretches from central Takarazuka towards the north. It represents the rural side of Takarazuka, where Tezuka deepened his understanding of nature. Climb up the steep slope and you’ll reach Shimonoike pond. Tezuka called it “Hyōtanike” owing to the fact that its shape resembled a hyōtan (calabash)*. The pond is surprisingly large, and the water reflects the Nakayama mountains, where Nakayamadera Temple is located. There were no houses on the other side of the pond back then, and the area was teeming with nature. Tezuka often spent time in the surrounding oak forest during the day and dreamed of strange creatures living in the pond at night.
In the “Midoro Swamp” episode of Astro Boy, intelligent swamp lizards enslave humans, and Astro Boy tries to save the humans. At the end of the story, the last remaining lizard says, “Humans will also eventually die out.” This phrase ends the story and gives the reader something to ponder. Perhaps at Hyōtanike Tezuka let his imagination soar as he contemplated the fate of humankind.
*Another theory holds that the name Hyōtanike comes from the hyōtan-like shape of the Kaminoike and Shimonoike ponds combined. 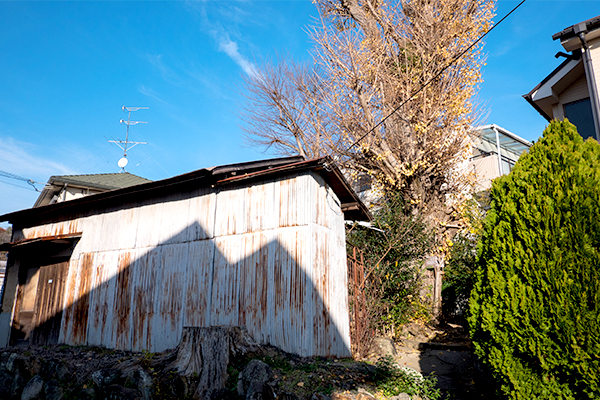 The large ginkgo tree is a landmark 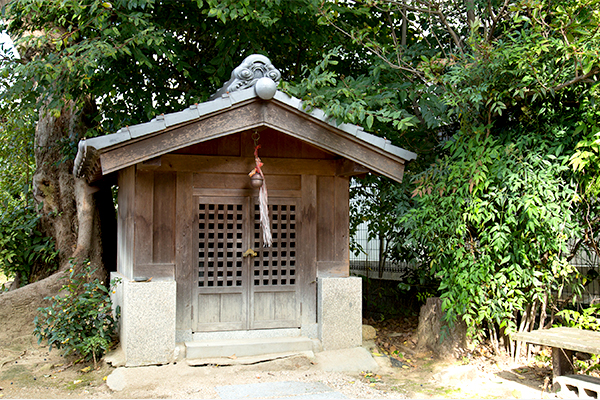 When you go to the upper area between Hyōtanike and Gotenyama Park, you’ll see a large ginkgo tree, beneath which is Hebi-jinja (snake shrine). The snake is worshiped here as a deity of money. Tezuka visited the fields north of this shrine to catch insects, including rare butterflies. The present shrine was rebuilt after the Great Hanshin Earthquake, but it retains its former ambience.
In days gone by, you could look down upon the city from here. It was a view that Tezuka said was his favorite of all. Unfortunately, you can’t see the same scenery today. 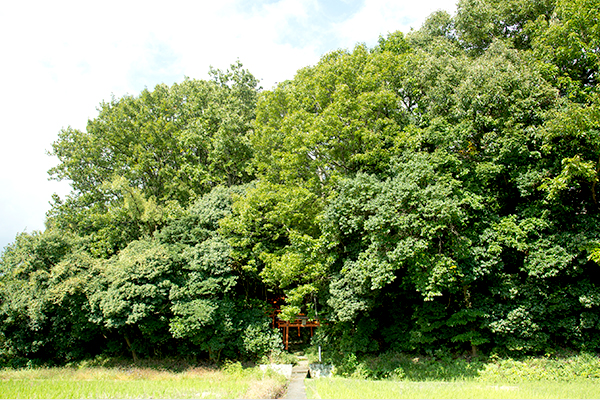 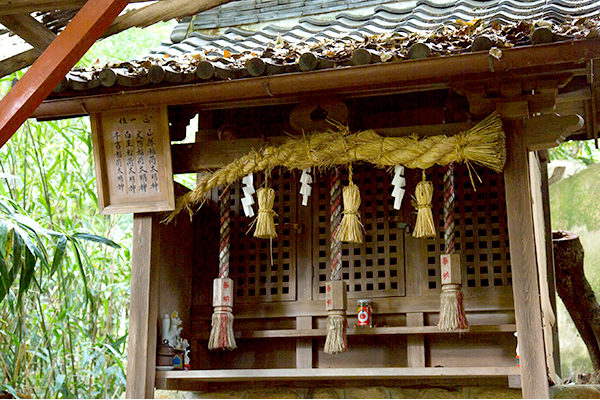 When Tezuka was in the fifth grade, he created a pen name inspired by an insect called “osamushi.” He added the kanji character for “insect” (虫) to his real name 治 and created the pen name 治虫 (“Osamu”). Fascinated with insects, he often visited the now-defunct Takarazuka Insect Museum. He would also catch insects at the Senkichi Inari-jinja Shrine. He developed an appreciation for the ephemeral nature of existence by observing the short lives of these forest insects.
Among the houses of Gotenyama is an open area of fields and a small, dense forest. Senkichi Inari is located in this forest. Urban development has created an area packed with houses, so it’s a miracle that this small oasis of nature still stands and retains the scenery of days gone by.